In Space No One Can Hear You Clean, er, Scream. But if you post in this forum about Space Quest - someone's sure to hear you. I think. Try it, anyway!
Locked
1 post • Page 1 of 1

Note: This patch has been reported to work with the Steam version of the SQ Collection.

Updated version!
I have updated the 2006 SQ collection patch. I have modified it to make it more Vista compatible. It also includes a DOSBox configuration utility and addresses the problem with the "color corruption" that some had with Full screen.

This installer is provided free with no guarantee, what so ever. It merely provides some Windows shortcuts, config files and icons to allow the new Sierra Quest Collections released by VU to run in the latest version of DOSBox. It also includes all relevant updates and patches. This patch must be installed in the same location as The Space Quest Collection.

WARNING!:
Vista users should avoid installing the collection in a folder under the %ProgramFiles% folder, as this has restricted write permissions which causes known issues with legacy games. Instead, choose another location such as "C:\Sierra\Space Quest Collection". To apply this patch, just install it in the same location that the Collection was installed. 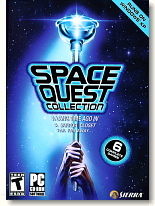 New Release Notes
~~~~~~~~~~~~~~~~~
NOTE: DOSBox is required to play these games. This installer will automatically setup the games to run in DOSBox, but you must have DOSBox installed in a folder named "DOSBox" in your "Program Files"* folder.

If DOSBox is not installed in %ProgramFiles%\DOSBox, allow this installer to download and install it for you.

DOSBox can be upgraded by installing any future versions of DOSBox into this same location after uninstalling or simply moving the old one. The latest DOSBox can be found at:

need to edit the shortcuts. Just install newer versions of DOSBox to the same location after uninstalling or simply moving the old version.

I have also included a PDF of the Manual for Spcae Quest VI, as the manual that came with the collection did not include Space Quest VI.

This was reasonable approach, as it addresses hardware and Operating System incompatibilities, to recreate the environment that the games were designed to run in, thereby bypassing many of the common problems such as timer bugs, sound issues, missing APIs, etc. It also "future proofs" the games against newer versions of Windows ®. However, they shipped it with the older DOSBox 0.63, instead of the much improved 0.65 available at the time. Now several later versions of DOSBox have been released.


Closing Notes
~~~~~~~~~~~~~
Problems, bugs or suggestions can be reported on Sierra Space Quest forum on The Sierra Help Pages:

For help with other Sierra games, see The Sierra Help Pages:

Use of this patch comes with no guarantee, explicit or implied whatsoever. Use at your own risk.