Phantasmagoria 2: A Puzzle of Flesh Installer on WINE

Feeling like you're being haunted? Well, if you look in here, you may find (or at least post for some help!) the answers you're looking for - for the Phantasmagoria games!
Post Reply
13 posts • Page 1 of 1

Phantasmagoria 2: A Puzzle of Flesh Installer on WINE

Collector wrote:No, the links are right. I just noticed that the ID files both installers use to identify which number of the disc is in the drive are named the same for both games, so they would not know that the wrong game was being installed. Of course there would have been many copy failed error messages if he had reading the output of the installer. Perhaps I need to find a file unique to each game to ID disc 1 for both installers.

Hi, Collector, the copy failed error messages happens with the Phantasmagoria 2 Full HDD Installer also. I ran the installer on Playonlinux Wine for Phantas2.
Some of the Sierra/Phantas2 folder files become read only would that be a problem?
I got the 5 CDs and also the game on GOG. Could I just copy the game files from one of the installs? Thanks.

Simply copying files from the CDs won't work as the resource files need to be joined. I am aware that people have used my installers via WINE, but know that there have been some problems with certain aspects. Usually this is from when the installers need to concatenate files using the copy command. Phantasmagoria 2 uses a utility by Enrico Rolfi's UniSCI. I have no idea if there might be any issues with it.

Collector wrote:Simply copying files from the CDs won't work as the resource files need to be joined. I am aware that people have used my installers via WINE, but know that there have been some problems with certain aspects. Usually this is from when the installers need to concatenate files using the copy command. Phantasmagoria 2 uses a utility by Enrico Rolfi's UniSCI. I have no idea if there might be any issues with it.

When does the failed copy occur? What version do you have? 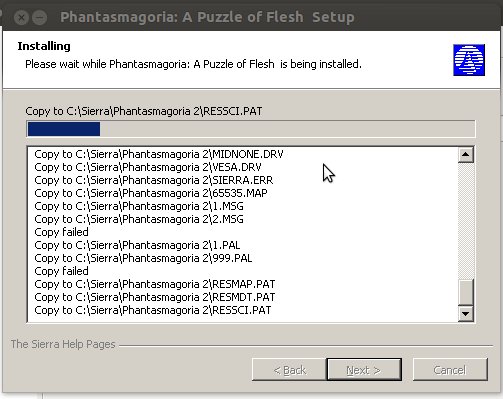 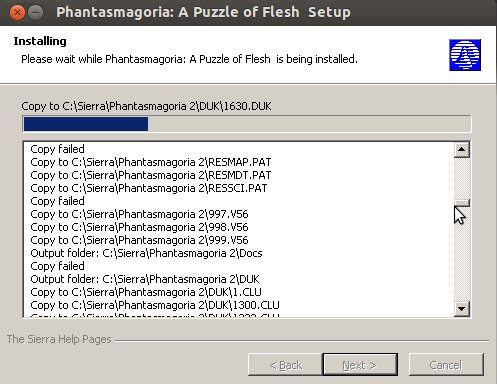 I looked in disk 1 readme.wri and requirements say Windows 95.
Top

Hi, I will reply back later. Thanks.
Top

Collector wrote:Look on your CD for VERSION and open it in a text editor for the version.

That is a known version. Yours is not a localized version, is it?

Give this build a try. It has no corrections, but I disabled the finish page. When the installer completes, copy the details to a text file and attach it here. That way I can tracking down what it is missing.

Hi, Collector, the CD says RSAC Advisory so I think its from the USA. I attached a txt file. I tried the Phantasmagoria II - 1.1 Update (P2FIX) from here:
http://www.sierrahelp.com/Patches-Updat ... dates.html I think it just outputs a 3485.CSC file.
On one install of the game I used the patch P2DOSPAT you still have to change CDs I think.
On DOSBox I can use imgmount to mount a number of ISOs and change CD using CTRL-F4.
I will try start playing the game later.

First, the patched you mentioned are included with the installer, so should not be applied to the installation. The P2FIX is for the Windows version of the game. It mostly corrects an issue for IE that was cause by the original installer. The SHP installer does not install the Win version, but converts it to the DOS version on installation. Using the P2DOSPAT after installation is not only unnecessary, but would probably unmap the concatenated resources, which is probably why you do not have the CD-less play. All of the SHP installers include the relevant patches, so none should be applied before or after installing.

I noticed that a couple of people have downloaded the installer output, which is a bit odd, since it does not make that much sense without seeing it in conjunction with the installer script

, not that it really matters.

Anyway, there are only 4 failed copies. These are irrelevant as they simply do not exist on that version of the game. They are included with the conversion to the DOS interpreter. I normally hide the copy commands with a simple file check before copy for files that do not exist on all versions supported. It causes no errors, but makes people think that something has gone wrong. I missed adding it for these 4 files. I just need to add the file checking for them. Thanks for bringing it to my attention.

Hi, Collector, I have downloaded the attached installer output file my self as well, I can't remember how many times though. I was meant to say I tried P2DOSPAT to install from the CDs. Thanks.

Hi, Collector, I have finished playing the game to the end on DOSBox Turbo for Android. The "RESSCI.000" is about 103.13 MB. On DOSBox Turbo it sometime quits unexpectedly and just froze once on one video I think. It's probably something to do with the app on Android.
Top

Return to “The Phantasmagoria Games”