by Collector
I have just completed a new installer for Gabriel Knight 3 that will work on newer Windows. Recently I have noticed people on different forums having issues with the installer that shipped with the game. I have also been seeing various threads where people trying to get the game to run in wide screen are recommending a registry edit. This is something that should only be be done by people that know what they are doing. The default resolution for the game is 640x480, primitive by today's standard and will unnaturally stretch the screen sideways on wide screen monitors. several issues that many have had with the game on XP/Vista are fixed by copying all of the data files to the game's directory. Finally, the codec, mpeg2dmx.ax, has been known to cause conflicts with GK3. 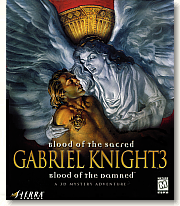