Is the game being a ROYAL pain? Need a hint? Got a problem? This is the place to discuss King's Quest!
Locked
1 post • Page 1 of 1

Note: This patch has been reported to work with the Steam version of the KQ Collection.

This installer is provided free with no guarantee, what so ever. It merely provides some Windows shortcuts, config files and icons to allow the new Sierra Quest Collections released by VU to run in the latest version of DOSBox. It also includes various updates and patches. DOSBox 0.72, ScummVM 0.11.1 and VDMSound 2.1.0 can be downloaded and installed from this installer. 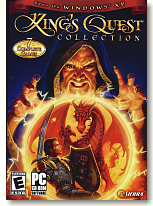 New Release Notes
~~~~~~~~~~~~~~~~~
New for this release: This version of the patch removes the need for the King's Quest Collection to be installed in its default location. This should help users of non US versions of the collection and anyone who wants to install the games anywhere else. DOSBox can be upgraded by installing any future versions of DOSBox to the same location after uninstalling or simply moving the one in this patch in:


The latest DOSBox can be found at:

I am also including ScummVM shortcuts for the AGI games. ScummVM ( http://www.scummvm.org ) supports the Sierra AGI games with improvements over the old Sarien, such as the ability to switch to full screen and uses the PC colors by default instead of the garish Amiga colors. To use this shortcut you must have ScummVM installed in:
If you do not, allow the updater to download and install ScummVM for you.

A VOGONS user discovered a fix for the jerky DOS intro in DOSBox. The Gabriel Knight 1 demo uses a VGA driver that does not suffer from this bug. Use of this driver for the DOS version of KQ6 eliminates this problem, so I have included this driver.


King's Quest Collection(TM) DOSBox Patch Notes
~~~~~~~~~~~~~~~~~~~~~~~~~~~~~~~~~~~~~~~~~~~~~~
While we are happy that Vivendi Games re-released these wonderful old Sierra classics for us, they were less than perfect releases. Most of the games were set to be run in DOSBox, the open source project to emulate an older PC with DOS.
This was reasonable approach, as it addresses hardware and Operating System incompatibilities, to recreate the environment that the games were designed to run in, thereby bypassing many of the common problems such as timer bugs, sound issues, missing APIs, etc. It also "future proofs" the games against newer versions of Windows ®. However, they shipped it with the older DOSBox 0.63, instead of the much improved 0.65 available at the time. Now several later versions of DOSBox have been released.

Starting with Windows Vista, some versions (64 bit) will no longer be able to run 16 bit programs. The next version of Windows after Vista will only be 64 bit. This means that the Windows versions of most of the Sierra games will soon no longer run in natively Windows. The version of King's Quest 7 that comes with the new collection is the earlier version 1.4, which had no DOS interpreter.

Many that upgrade to Vista will find that their copy of King's Quest 7 won't work. All that they would have needed to prevent this was to have used Version 2, which not only shipped with a DOS interpreter for the game, but had a number of bug fixes. The second King's Quest Collection used version 2.00b, which runs flawlessly in DOSBox and will bypass the infamous firecracker timer bug.

This patch upgrades King's Quest VII version 1.4, Windows only interpreter to version 2.00b, with the DOS interpreter. It includes a pre-configured shortcut for DOSBox.


This patch will preconfigure both game and DOSBox settings to what should be optimal settings for most users. The DOSBox settings can be modified by editing the dosbox.conf in each game's respective folder. While the game settings can also be changed by editing the RESOURCE.CFG file in each game's folder, Sierra originally provided a small program, INSTALL.EXE, with their games that allowed the user to easily configure the game for the PC's hardware. This program and its associated files were removed by the company that prepared the new collections. This patch restores these missing files.

Selecting different hardware for each game can now be done by simply running INSTALL.EXE from each game's folder.

WITHOUT MOVIE SUPPORT:
This version includes David Gherbaz's solution for the Windows version of King's Quest VI. It does not have support for the opening Halfdome/Sierra logo morph or the intro movie, but does show the text of the intro without images or speech.

It works without VDMS and thankfully does not suffer from the cursor bug under XP. If you wish to view these movies you can either just open the game's folder and double click on the .AVI files or start the game with the VDMS shortcut to watch the movies (I am still including the VDMS solution). Note that you will not be able to use save games between the two.

DISCLAIMER: THIS WINDOWS VERSION OF KING'S QUEST VI HAS A BUG WITH THE CURSOR UNDER XP. IT DOES NOT CHANGE VIEW WITH THE CHANGE OF FUNCTION, I.E. IF IT IS SET ON "WALK" AND YOU CHANGE TO "TALK" THE CURSOR WILL STILL LOOK LIKE IT IS ON "TALK" UNTIL THE CURSOR IS MOVED OUT OF AND BACK INTO THE GAME WINDOW. THIS IS A BUG THAT I HAVE NOT FOUND A FIX FOR. PLEASE DO NOT ASK FOR HELP WITH THIS.

Return to “The King's Quest Series”