Slipping into your Leisure Suit? Need tips? Or just want to discuss Leisure Suit Larry (Ladies, try to keep the swooning to a minimum, please!) - this is the place to do it!
Post Reply
8 posts • Page 1 of 1

So. Sorry, folks - it's confession time.

I was a teenager the first time I played LSL2, and of course I recognised the whole Communist slant and so on. But since English wasn't my first language, the name of the final villain, Dr Nonookee, meant very little to me.

Anyway, time passed, and I played LSL2 again, this time in my mid-20s. Of course, this time I understood the rather obvious pun, and groaned at it. But still, the ovearching plot (i.e. getting the onklunk and carrying it around, etc.) seemed rather pointless.

Time passed again, and I played LSL2 again, this time in my 30s. I could appreciate more about the game, but still, Dr Nonookee's name meant nothing beyond the pun, and the onklunk plot seemed to be just a contrived way to get Larry to the island.

And then, yesterday - for the first time - I watched the classic James Bond film, "Dr. No". And everything fell into place.

And in the middle of the film, I jumped up from the couch and yelled "Aha! So Dr. Nonookee is a parody of Dr. No, and the whole thing was a broad parody of the James Bond films!!!"

(And, of course, everyone else gave me dirty looks and said, "What the hell are you talking about, Rath? Sit down!")

But now that I know what it was, I feel so stupid that I hadn't realised it before! Drat it. Now I feel like banging my head on the desk. 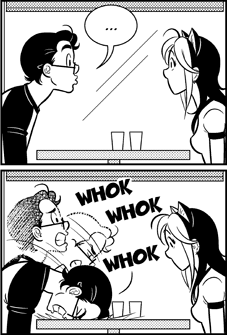 Ah, there we go. All better now.

So... just to be sure... you know the name of the island... if you say it correctly... means something too right?
Tawmis.com - Voice Actor
Comic Relief Podcast!
Neverending Nights
Hello, my name is Larry. Larry Laffer!
Top

I wonder if the name "Kalalau" (the chief's daughter) means anything, though.
Top

Kalalau, as one word, means to call, as one person does to another. Ka-lalau means The wandering one.

I know thst feeling Rath... But we're the ones with the advantage since we might get a new dimension to playing for the second time than many native speakers do.

There's a new script around: PHANTASMAGORIA! Check the Script Party topic in the Bard's Forum!
Skip to new scripts
Top

A-ha! So Ka-lalau in the Hawaiian language means roughly the same thing as "Perdita" in Latin: lost, wandering.

Not all those who wander are lost!

A-ha! So Ka-lalau in the Hawaiian language means roughly the same thing as "Perdita" in Latin: lost, wandering.

Not all those who wander are lost!

Well I wonder - and this seems to be a stretch - that since it (as a single word, like the character's name) means to "call" - and she's a female - if the indication is "call girl"... as in... the professional kind.
Tawmis.com - Voice Actor
Comic Relief Podcast!
Neverending Nights
Hello, my name is Larry. Larry Laffer!
Top

It makes a kind of sense, but Kalalau's character is never expanded on beyond the "love interest" (or shall we say, "lust interest") in LSL2. Then, in LSL3, she suddenly becomes the "gold digger" type (well, she'd have to be, otherwise there's no game).

So if your guess is correct, Tawm ... perhaps she is a "call girl", albeit of the worst kind - i.e. the kind that cheats people and takes all their possessions.

(But then, isn't that always the case for Larry?

This seems to be a pattern for Larry. The lack of stuff is common across most adventure games, of course, but only Larry gets dumped in every single game ... but again, obviously, without getting dumped, there would be no reason for another Larry game.