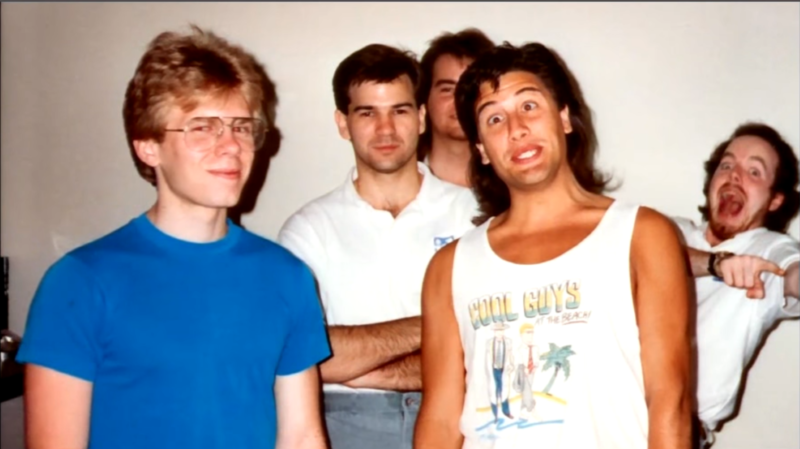 We've seen our share of video games turned into films and TV series, but what about the real-life origin stories behind those games? USA Network has planted a flag as the first TV network to develop a series based on the true stories of a video game's genesis, and it's a meaty one: Masters of Doom.

The series, named after the 2003 non-fiction book, will revolve around the creation of id Software, its meteoric rise following the launch of 1993's DOOM, and its iconic pair of studio leads: idiosyncratic programming wizard John Carmack and brash, long-haired level designer John Romero. As Deadline reported on Thursday, the series currently only exists as a pilot order, meaning that the wheels have begun turning to produce and cast a single, premiere episode, as opposed to an outright guarantee of a season's worth of episodes.

Author Tom Bissell has landed the pilot's writing honors, and he comes to the gig with experience writing about video games (Extra Lives), for video games (Gears of War 4), and even testing video games (as a late-'90s QA staffer at id Software, of all places). Bissell's attachment to the project makes more sense when you see its production house: Ramona Films, run by James and David Franco (who adapted Bissell's co-authored book The Disaster Artist into an award-winning 2017 film). Bissell is among the project's many executive producers, alongside original book author David Kushner.

Deadline did not yet report on a director or any casting decisions. Neither USA Network nor its parent company NBC Universal have formally announced this series' pilot order.

Should the series come to fruition, it would land neatly in a growing nerd-homage sector on television, firmly between USA Network's own gritty (and technically accurate) Mr. Robot, AMC's Halt and Catch Fire, and Netflix's Stranger Things. No doubt, any Masters of Doom TV adaptation will focus on Romero's very late '70s/early '80s-sounding childhood stories of playing D&D or biking with pockets full of computer-compatible punch cards. And we look forward to seeing USA depict the real-life anecdote in which Carmack is too busy furiously coding to notice a stripper that has been sent to his workplace.
Tawmis.com - Voice Actor
Comic Relief Podcast!
Neverending Nights
Hello, my name is Larry. Larry Laffer!
Top

Yes, the fashions and hair are distinctively early 90s (or late 80s at the earliest). Anyone who's lived through that era knows that!

I wonder what this will be like, but I don't think I'll ever see if because Aussie TV never shows anything cool like this.