What are you playing now?

Talk about anything you want here
Post Reply
1253 posts

I have never played ANY of the "Alone in the Dark" games... or if I have, I have no memory what any of them were like.

It was one of the first games that used the Grim Fandango/Escape From Monkey Island "tank-control" style of 3D. Where the backgrounds are static images, but 3D models move around in the world as if it were fully rendered and then when you walk off screen it switches to a different camera. It was from 1992 so it might have even been the first one to do such a scheme? Made by Infogrames. The models and animations are very low quality and almost laughable by today's standards. But yet it still manages to be creepy. There is combat when monsters show up, but the game really is an adventure game at heart, having inventory, world interactivity, and puzzle-solving. At the very beginning of the game some of the combat is optional as a giant wolf (or something with teeth lol) breaks through the window and you have to fight it. Or you can push a big wardrobe in front of the window so it can't enter. Then a trapdoor opens and a zombie comes up. OR you can cover the trapdoor by pushing a chest on top of it that's also in the room. Little things like that. Combat is not totally avoidable, though.

The controls are veeerrryy dated, however. But you get used to it after a while. You have to press ENTER to bring up your inventory/action list. You either select an inventory item to interact with it or use it in the world or you select one of the action verbs to perform: Fight, Open/Search, Close, and Push. After your selection, you must hold SpaceBar to perform the action. It's really complex with fighting because when you select "Fight" you have to hold SpaceBar to be in your fighting stance and then also hold down one of the arrow keys for one of the 3 different attacks (kick - slowest and strongest attack/most range, right punch - fast attack/moderate power, left punch - fastest attack/weakest power). There are also other weapons in the game you can use like swords, knives, objects you can throw, bow and arrows, revolvers, shotguns, etc. Fun games, but yeah controls are definitely aged. No mouse control at all (but the setup utility uses a mouse lol!).

You can also choose to be a male character or a female character, who have different roles in the story, but the same gameplay. 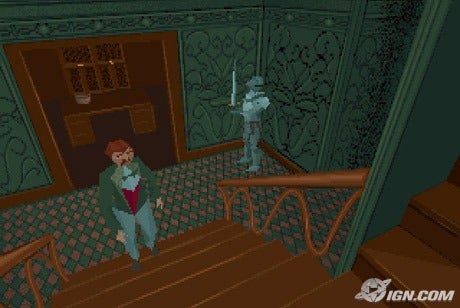 I like that. I still remember my old ATARI, back from the early 80s. Yes, it didn't have memory.

I played the original AitD. It was very tough because I couldn't figure out how to fight against the zombie and constantly died.

Watched some video of AitD - I have two of them but never played them - it's weird how you get a complete image change as soon as you bring up the interface. Combat looks clunky but for the day it was made it must've been quite impressive!
There's a new script around: PHANTASMAGORIA! Check the Script Party topic in the Bard's Forum!
Skip to new scripts
Top

I mean, 1992. That's gotta be one of the first polygon 3D games ever made. I know there were earlier experiments with polygons (untextured or even wireframe), but it feels to me like AITD could have been the "AAA" game changer of its day that pushed that forward. There were no polygons in first person shooters I believe until 1995 with Star Wars Dark Forces and those were only a few random objects (like Kyle's ship and that claw-arm thing that attacks you). To put it into perspective, Wolfenstein 3D was released in 1992 and Doom a year later. 256 colour VGA was still brand new with a wild and flashy spectrum of bright colours to show off its capability (Wolf3D was very colourful)! And somehow AITD managed to keep a very creepy atmosphere with its palette selection. At the time I think people were too busy ogling over the technology (which was full screen!) to bother caring about the interface as much. People probably did, but few. It was a huge enough hit to warrant two sequels (which eventually got textured polygons). AITD3 is still my favourite.
01010100 01110010 01110101 01110011 01110100 00100000 01010100 01001000 00110001
Top

Hmm. Am I right in thinking that a 3D-polygon game is one that uses polyhedra, like cubes and pyramids, to create graphics? Just curious - graphics manipulation isn't my strong point. *smile*

Would you call something like "Another World" a 3D-polygon game, then?
Top

Music's great too, I love how Danse Macabre was used to solve a puzzle. Wish I had more time to play at the moment...
There's a new script around: PHANTASMAGORIA! Check the Script Party topic in the Bard's Forum!
Skip to new scripts
Top

Rath Darkblade wrote: ↑
Wed Jul 31, 2019 8:14 pm
Hmm. Am I right in thinking that a 3D-polygon game is one that uses polyhedra, like cubes and pyramids, to create graphics? Just curious - graphics manipulation isn't my strong point. *smile*

Would you call something like "Another World" a 3D-polygon game, then?

From what I found, I, Robot has the credit as the first "polygon using game" - for the Atari.
Tawmis.com - Voice Actor
Comic Relief Podcast!
Neverending Nights
Hello, my name is Larry. Larry Laffer!
Top

Thanks to a sale on Steam, I just replayed Lara Croft GO for the first time in a while, and for the first time on PC, as my iPad is no longer powerful enough to support it.
"It is better to know some of the questions than all of the answers" - James Thurber
Top

Strange. The name "I, Robot" naturally makes me think of Asimov's classic story, but the game seems to have had very little to do with Asimov. Isn't that a breach of his copyright?
Top

Yeah, I had meant ever released, and that the first Polygon game was on Atari.
But it appears it was an arcade game that used vector polygon (which also, ironically ended up on Atari) which is Battlezone: https://en.wikipedia.org/wiki/Battlezon ... ideo_game)

But now I am curious ... because Battlezone doesn't look great (obviously) - but is it technically "the first" game to use polygon graphics?


Rath Darkblade wrote: ↑
Fri Aug 02, 2019 1:57 am
Strange. The name "I, Robot" naturally makes me think of Asimov's classic story, but the game seems to have had very little to do with Asimov. Isn't that a breach of his copyright?

Because it's common words, I don't think he can "copyright" the title.
And since the game has nothing to do with his book, it's not like they yanked the "story idea" for the game from his books.
This talks about books with the same title. This goes on to explain titles of books (or anything in general) are not protected, especially with "common words." This does side by sides with books with the same title.

I doubt I could write a book called "The Hobbit" even if it was about aliens in space conquering Earth. Because of the word "Hobbit" is undoubtedly trademarked.

But I could write a book called "I, Robot" and have it be about vicious aliens conquering Earth.
Tawmis.com - Voice Actor
Comic Relief Podcast!
Neverending Nights
Hello, my name is Larry. Larry Laffer!
Top
Post Reply
1253 posts