Feeling like this game could be murder... literally? Well, come on in here for some extra detective work (and clues/hints/etc!) for the Laura Bow games (The Colonel's Bequest and The Dagger of Amon Ra).
Post Reply
6 posts • Page 1 of 1

I'm surprised that there's still no topic at all about this game...
http://www.thecrimsondiamond.com/
It's not a Laura Bow game, nor is it a game with any personal relationship to Sierra, but it's pretty much an homage to Laura Bow. It's a text parser game (not very happy about it) with EGA graphics (really happy about it

) and, as a German review said, screenshots from "The Crimson Diamond" wouldn't stand out much if intermingled with "The Colonel's Bequest"... 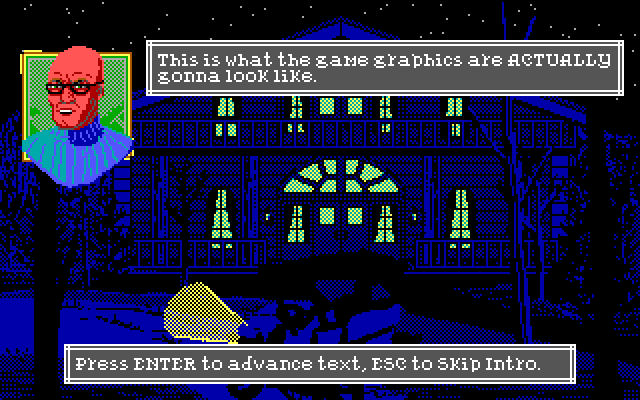 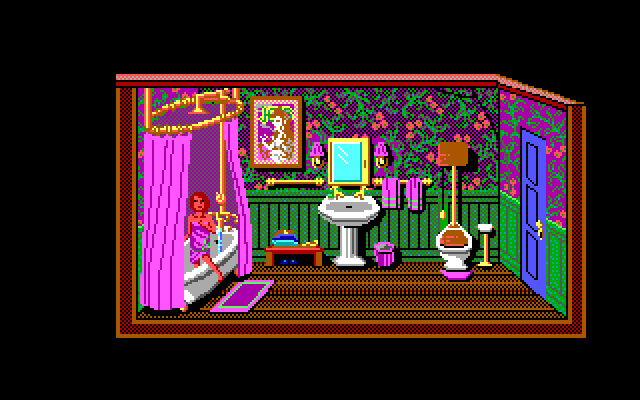 (Note the beautiful wallpaper and the Alphonse Mucha poster on the wall - I really like Art Nouveau, particularly Mucha. And the shower scene is quite a nod to "The Colonel's Bequest", except that in "The Crimson Diamond" you can take a shower safely - you just have to lock the door from the inside... Nancy will hear someone trying to open the door, but dismiss it as probably something in the pipes... I would also add that it's just non-threatening - someone trying to open the door, noticing: "Oh well, it's occupied" - how could Nancy know at this point that this person could have killed her if the door wasn't locked?) 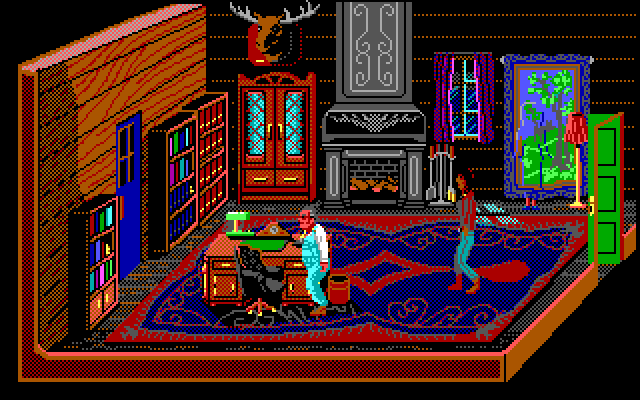 (Spoiler:
Nancy is behind the tapestry.
A bit more risky, easier to be noticed, than the holes in pictures in Misty Acres, which were created precisely for the purpose of eavesdropping and secretly observing other people...)

Generally, the plot is like: it's happening in Ontario, Canada, in 1909, if I remember well... Nancy Maple is working in a natural history museum and hopes to get a formal training in mineralogy (remember that it was a time when women still weren't allowed to study in a lot of places and I can't even express my anger over misogyny, over all this hatred, all this bullshit spread about women by men who don't even have a clue about us). At the same time, in a fictional town of Crimson, a fisherman finds a large diamond in the belly of a fish and it sparks hopes that diamonds could be found somewhere in the area... So Nancy is sent by her boss to Crimson to investigate the situation.
Currently, a free demo is available, which only includes the intro (mostly unfinished, that's why Jack says "what the graphics are gonna look like") and the first evening in the mansion - you also don't go outside, at most you can go to the balcony. If I remember well, I heard Julia Minamata say in one of the interviews that she's trying to aim for a release around November this year.
Top

I haven't played the Laura Bow games, but I can see this is going to be a good one.

And yes, I agree that the whole "women shouldn't be allowed to study X or Y or Z" etc. thing is ridiculous. Some colleges and universities don't allow people to study there on the basis of their race or religion. My father wasn't allowed to study electrical engineering in his hometown because he was Jewish - this was in the Ukraine in the mid-1960s. He had to travel to Kiev to study.

Speaking of which, it reminds me of an anecdote. Please feel free to use it if you wish - it debunks the whole thing neatly.

(May Saxton tells this story):
One of Mary Livermore's favourite stories was about the time she and five other girls had gone to see President Josiah Quincy of Harvard about studying at the university. They demonstrated their learning for him and he said, "Very smart girls... unusually capable, but can you cook?" They assured him that they were all expert domestics. "Highly important," he said.

He continually diverted them from asking their questions until finally Mary burst out that they wanted to go to college with their brothers: "You say we are sufficiently prepared; is there anything to prevent our admission?" He told them that the place for girls was at home.

"Yes, but, Mr. Quincy, if we are prepared, we would not ask to recite - but may we not attend the lectures and sit silently in the class?"

"I wish I were God, for the instant, that I might kill every woman from Eve down and let you have the masculine world all to yourselves and see how you would like that!"
Top

Rath Darkblade wrote: ↑
Sat Apr 11, 2020 5:00 am
And yes, I agree that the whole "women shouldn't be allowed to study X or Y or Z" etc. thing is ridiculous. Some colleges and universities don't allow people to study there on the basis of their race or religion. My father wasn't allowed to study electrical engineering in his hometown because he was Jewish - this was in the Ukraine in the mid-1960s. He had to travel to Kiev to study.

Yes, I have read a bit about anti-semitism in the Soviet Union. Which proves that under the guise of supposed "internationalism" "good" old Russian chauvinism was alive and well, and that there's really very little difference between communism and fascism.
The world needs more prosocial politics, a sharp turn away from deadly neoliberalism (the coronavirus epidemic shows that really, "deadly" isn't too strong a word) - but totalitarian communism = fascism. I'm a leftist anti-communist.

By the way, it's "Ukraine", not "the Ukraine". Ukrainians very much don't like calling their country "the Ukraine", because it implies that it's a region (implicitly: part of Russia, of course - as Putler still believes), not a country.
Top

Ah, whoops. Ukraine it is.

As for Putin ... well. What else would you expect from an ex-KGB man and member of the United Russia Party (basically the Communist Party in different colours)?

I wouldn't be surprised if he tried to take even more of eastern Europe, if he could. He's already annexed Crimea (as far as I'm aware), along with other things.

Under Putin, Russia has seen purges, jailing of political opponents, curtailed press freedom, and the lack of free and fair elections. Putin regularly persecutes and jails political critics and activists. Of course, he rejects accusations of human rights abuses - naturally - because he can (and probably has) simply make his opponents "disappear".

I wouldn't compare him to Hitler (Godwin's law and all), but as a "strongman" ruler, he's probably closer to Stalin.
Top

So. I will say; I am looking forward to this. I just wish Julia would have picked a different hair color and dress color for her main character. It is clearly a nod to Laura Bow, but the same hair color and same dress color... Would have just been cooler if her character had black hair, blond hair, a darker brown hair - at the very least.

I'm super looking forward to this. Legit EGA graphics, parser interface (with point and click as well), and LEGIT MT-32 soundtrack by Dan Policar! I helped Dan quite a bit with setting up his MT-32 for composing with his modern DAW recording software and using custom instruments. I'm just so psyched it's going FULL Sierra inspired with MT-32 to boot.

Return to “The Laura Bow Games”